Aging is a major risk factor for disease and death but what is the cause of aging? Despite many theories it is still unknown. What we know is that as we age our body produces fewer proteins that have a large number of important functions in our body. For example:

Basically, our bodies make thousands of specific proteins that serve important roles in everyday functioning — in fact, the human body is about 45% protein on a dry matter basis. 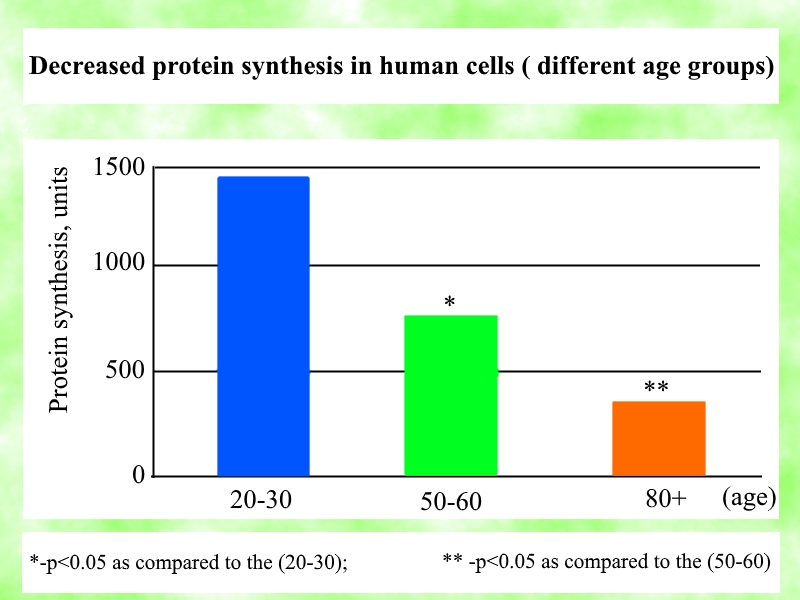 As aging is associated with a decline in the synthesis of protein, it is logical to assume that if the synthesis is restored aging can be slowed down. As it turns out this assumption is correct. Scientists V. Khavinson and V. Morozov have found a way to repair protein production and have achieved incredible results. Using the following methods can increase lifespan by 20-40% 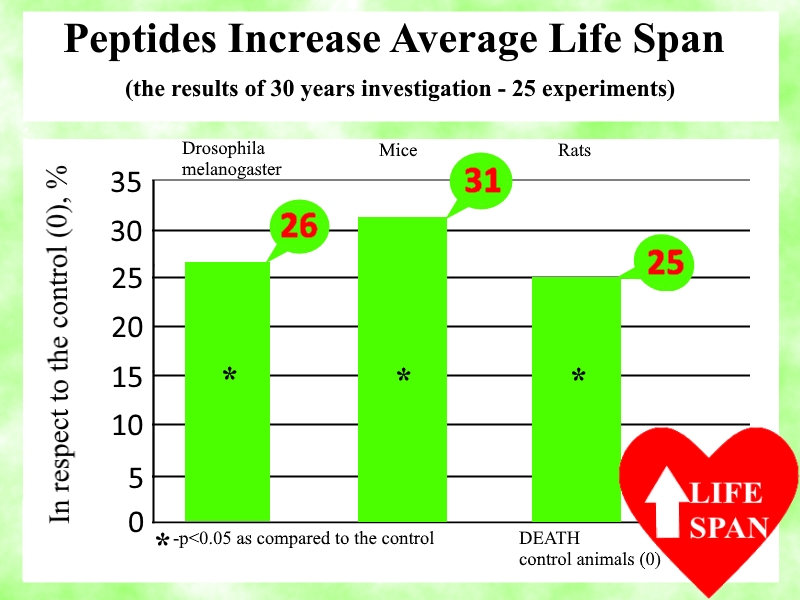 The information about different proteins is stored in the DNA. In order to launch protein synthesis a DNA fragment, a gene, has to be activated by triggering molecules, peptides. Peptides are relatively short chains of amino acids and they are an essential part of the cell self-regulating mechanism:
Cells constantly degrade aged proteins by breaking them down into amino acids and peptides. Some of these peptides match specific parts in the cell DNA following the lock-key principle. As a result, the peptide resumes the synthesis of the protein from which it was originally built. When the protein ages, it is fragmented into the same peptides once again. All of this forms a circular process that is vital to cell life. 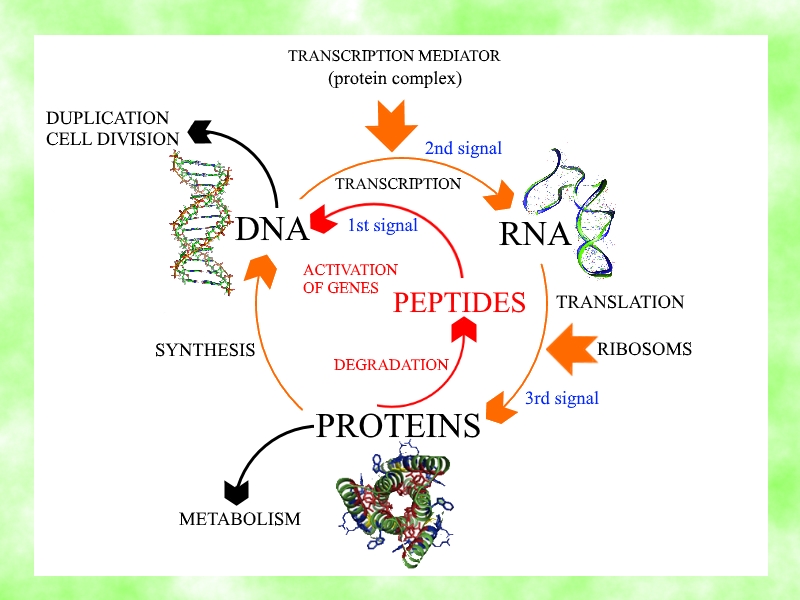 However, due to extended exposure to environmental hazards and stress this cell self-regulating mechanism is compromised and we become peptide deficient. Peptide deficiency leads to cell malfunction and eventually to diseases and premature aging. Luckily, we can restore the peptide-protein cycle with peptide supplements.

The first peptide product was created for the military in the Russian Military Medical Academy 40 years ago in 1974 by V. Khavinson and V. Morozov since 1977 and it has been authorized for clinical use under the name Thymalin. It cointains thymus peptides, extracted from young calves, that restore the impaired immune system and minimize the risk of cancer by several times. Shortly, Epithalamin, a product formulated with the pineal gland peptides was developed. It prevents premature aging, improves the function of the endocrine, immune, cardiovascular and reproductive systems, lengthens telomeres, restores carbohydrate metabolism, and strengthens bones and joints. It was proven that if administrated together the pineal gland and the thymus peptides can prolong human life substantially. Their high efficiency has been shown in more than 50 experiments on animals and multiple clinical trials in the last 40 years. 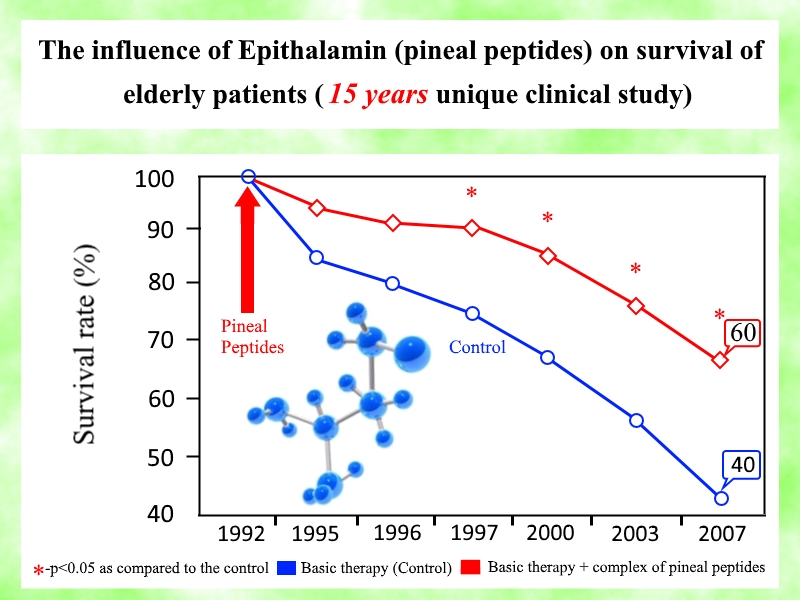 Eventually, peptides have been extracted from almost every body system and demonstrated stunning tissue-specific properties, i.e., they have beneficial effects on the organs which they were extracted from.

In the last 40 years these medicines have been taken by more than 15 millions of people and no side effects have been found. The fact is that peptides are apparently evolutionary the oldest cell self-regulating mechanism and as their structure is quite simple they have not undergone any constructional changes over time. That means that peptides in animals and humans are identical. Besides it was also proven that peptide intake can only normalize the protein synthesis and cannot overstimulate it as a cell cannot take more peptides than it needs.

For many years the peptide preparations were available only as medicines, in the form of injections. However some years ago Prof. Khavinson and the St. Petersburg Institute of Bioregulation and Gerontology created dietary supplements that can also reduce peptide deficiency and restore peptide-protein cycle in cells. They can be divided into natural and synthesized peptides.

Natural peptides is a group of peptides of less than 50 amino acids and with a molecular mass of less than 5 kDa, free from foreign DNA or protein substance, extracted from organs and tissues of young calves by a patented method of thorough filtering. 5 kDa is very little. The molecular mass of DNA fragments and proteinaceous infectious particles, the prions, are several times bigger than that. Therefore these peptide supplements are extremely clean products. They do not have any immunogenic or mutagenic properties.
Inside the gastrointestinal tract the natural peptides break down into amino acids and di-, tri- and tetrapeptides that match the DNA in a complementary way and activate protein synthesis in the respective body system. Their performance is gentle and gradual. Their effect continues to grow even after finishing the supplementation course and lasts up to 4-6 months until the peptide-protein cycle is impaired again.

When and how to take peptides?

It is advised to start taking peptide supplements upon reaching 35 years of age as a preventive measure against premature aging. At this stage two to three 10-day courses of the basic products per year are sufficient to maintain the body's well-being. These basic products are Vladonix, Cerluten, Ventfort, Sigumir, Svetinorm and if a person works night shifts or often takes intercontinental flights, Endoluten. They regulate the function of the systems that age faster. If required, other peptides could be added as another ten-day course, based on individual needs.

Starting from 40-45 years, two courses a year become necessary, with 2 capsules daily for 30 days per course. The health in the decades to follow will majorly be influenced by the degree of recovery achieved during this period. It is crucial to start timely biannual intake of extensive anti-age courses that include Endoluten, Vladonix, Cerluten, Ventfort, Sigumir, Svetinorm, Chelohart and for men Libidon, Testoluten, for women Zhenoluten and Thyreogen. Additional products are chosen based on individual needs and predispositions. Generally, the older we get, the more organs that require additional support.

Starting from 50-55 years, it is generally recommended to increase the number of courses a year from two to three. If you need to take more than 5 peptide products it is usually advised to split the course in several months so that each month you take 5 products or fewer. Please note for better absorption peptides are taken 30 minutes before meals.

There is still no way to stop aging but thanks to the scientists' intensive work during the last 40 years, we finally have dietary supplements that substantially slow down aging by reducing peptide deficiency and restoring cell peptide-protein cycles in the body. There are 19 natural peptide products and 12 synthesized ones that cover almost every body system and organ. Thus, if you want to live longer being mentally and physically healthy you have now a real solution.